Home/ Under the Crimson Moon: A Dragon's Pride Completed 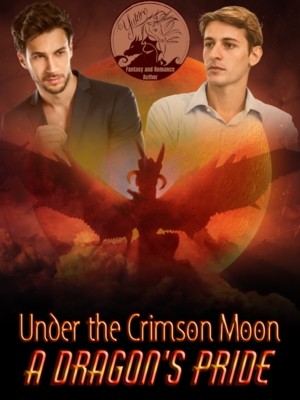 Under the Crimson Moon: A Dragon's Pride

Book 3 in the Under the Moon Series: Maxen (or Max for short) has always enjoyed the old myths, legends and traditions of Wales, but he never expected in his wildest dreams to be dragged into one himself! When a huge red dragon lands in front of him, demanding a battle, Max is left perplexed by the notion. There is no reason for him to battle a living-breathing dragon! He refuses the challenge. After all, the dragon has an enormous advantage over Max. With the dragon not seeming to give up, and with even more supernatural beings coming into the picture, Max is about to find out what a God of the Underworld is capable of… the fire burns bright, but so too does the passion and desires of a God!

I knew from the moment a particular group of werewolves had asked for my return that something had been off with them, but I had agreed to come to their world all the same. What I hadn’t expected was the greeting I received. Another of their kind was trying to prevent me from carrying out the promise, but it hadn’t been just any werewolf. Their glowing aura told me all I needed to know.

This was one of the Moon Goddess’ stars. A spirit much like her, but not at all like myself. They claim to be Gods, whereas beings like me ARE Gods. I keep my expression neutral as I step through the black hole and gaze at the scene before me. The spirit and three of his friends are here, trying to ward off the angry souls that escaped through the same black hole as I did.

I sigh before snapping my fingers, bringing them back under control again.

As soon as the scene quietens down again, I return my gaze to the Star-Spirit and utter, “to summon me, then to attempt to keep me from returning. Is this the way mortals treat their Gods now?”

The Star-Spirit tried to make some half-baked excuse for the reason behind his actions, but it didn’t matter to me. I already knew the reason for my summoning, and that war was behind it all. There was always war on this pitiful excuse of a planet, but that was why I was here. I looked after Annwn, the Underworld and caretaker of the dead souls.

Cutting the young Star off, I grunted, “I am well aware of what the pack wished me to do. I accepted his terms on the condition that he brought me the head of my foe. I see no head, but I see a young pretender instead, among one who they asked me to slay and two who gave up their humanity to the will of your kind.”

I stepped down from the shrine, positive my unkind words would have the poor thing restless. He barely held eye contact with me for long. A strange but common act people had when in my presence. I’m sure it had something to do with showing some signs of respect, but I had other things on my mind. There were more important things to find out, so I scanned each mind.

The Star-Spirit went by the name of Zach, and this was one of his many reborn forms. The Hunter, in some strange amusing happenstance, was the werewolf’s mate and had his own wolf-spirit but was not a werewolf himself. He was called Rem.

As for the last two, I couldn’t stop the look of disgust that washed over my face. They were what their race called Ancient Ones. The red-haired one named Rakesh was nothing special, but his powers and abilities were waning, while the other… he was an interesting one. His name was Kayden, and he had Hunter blood, though was no longer a half-breed and was now a fully fleshed Ancient One.

How the four of them could stand one another, I was sure I would regret looking into it further. Instead, I focused on what had happened to the original group that summoned me. Then, I said, “your groups defeated those who called me forth. I have seen into all of your minds, and I find you all lacking.”

I stepped around Zach, a sneer on my face, as I judged each one in silence. That was when the blue-haired feisty one opened his loud mouth to complain, “what the fuck do you mean, lacking? You’ve been in your own shitting place for who knows how long. You don’t get to judge us!”

Amusement flickered through my thoughts, but I held my expression as before. He had some balls to talk to me that way and likely didn’t know what he was dealing with. I had to give him credit for where it was due, though. Despite being foolhardy, he was brave to do so.

The one named Kayden scolded his friend, “Rem! Shh! Don’t anger a God of Death!”

Oh? So they at least knew who I was? I was surprised, given they were all still children compared to me. Still, regardless of how much these people amused me, I couldn’t allow them to speak this way to me, out of principle. I made a low, tutting sound and raised my hand, palm forward, towards Rem.

Calling on my prowess, a powerful gust of wind picked up around me and sent the blue-haired Hunter back towards the cave’s wall. I hadn’t intended to hurt him too much, but I must have forgotten my strength. It’s been a long time since I’ve been here. When he seemed to be fine, I was glad. Though I made sure none of them were aware of my feelings about it.

What I hadn’t realised was that their flirting had given me cause for a look of bemusement to sneak onto my face. That two enemies could love each other this way gave me hope for this place’s population.

Realising I still had work to do, I gazed at all the souls still held in place by my command. “I command you all to return to where you belong. Opportunist things,” I hissed at them, ordering them back home. As soon as they were all back to Annwn, I gazed back at the rag-tag band of misfits. “Since the other ritual has failed, I suspect the other end of the agreement will not be completed,” I uttered.

As my gaze landed on Zach, the Ancient Ones came over to protect him. Despite my sauntering their way, they refused to move.

The four of them were silent now as they waited for my every move, every word. This was how mortals used to be around the Gods of this world. Filled with awe, respect, and fright at such powerful things that they worshipped. I much preferred it when their attention was completely on me.

I finally gave them what they wanted. “Since it was you who interfered with the bargain, it is to you that the price must be paid,” I said, setting my sight straight on the only one who I could entrust with what I was about to demand of them. Zach.

Folding my arms across my chest, I gave him long enough to process what I had just said. I could tell he was anxious in the way he was trying to look at me but kept looking away again.

“What… sort of price?” He finally asked me.

I couldn’t help but twist my lips into a smile as I asked, “not fleeing?” When he shook his head, I knew my choice had been the right one to make, even if I scared him far more than he should ever feel. Despite him not being a true God, he was still far closer in rank to me than the Hunter or the Ancient Ones.

“Why should you have to pay the price!?” Rem suddenly demanded to know of his mate. “It’s those other werewolves who caused all of this mess, tried to summon two immortals for their own selfish reasons! This entire war has cost so many innocent lives to be destroyed and ended! You’ve been trying to prevent it all!”

“I agree with Rem. It isn’t fair for you to be the one to suffer,” Kayden agreed with Rem. I could tell they were not happy about this ‘request’ of mine, even if none of them knew what that was yet.

Zach had his bravery, though. “I’ll be fine, don’t worry too much,” he told his friends. Then, looking back at me, he asked, “what price must I pay?”

My smile grew wider at that. He was willing to pay any price to ensure I remained passive. “We shall swap places,” I told him, holding that smile of mine. “A year. After that, regardless of my goals being completed or not, you will return unharmed and as you are now,” I continued.

Confused, but willing to listen, he asked, “And my friends here?”

I shrugged my shoulders at him. I had no interest in any of them. There was only one I wanted to face. I slowly gestured to the remaining group members and told Zach, “I have no reason to war with them. The ones who struck a bargain have failed to keep their end of the deal. They did not return my foe to this realm, so I must find him myself. I have no obligation to complete the deal on my end because of their failings.”

The Star’s lover protested as I knew he would. He was a firecracker and for that; I had to give him just a small amount of respect. If he were the same as I was, he would have been a powerful God. Zach settled him down rather quickly with a kiss and some flirting. I paid that part no mind.

When he was done, he turned to me. “Then God of Annwn, as long as my friends are not punished, then I accept the deal. I’ll swap places with you for a year, and regardless as to if you find and defeat your enemy or not, we will return to our rightful places once that year is up,” Zach said, holding out his hand to seize the deal.

I offered him a small smile before accepting his hand. The deal had been accepted. All that was left was for him to take my place in Annwn.

Rem’s cry of dismay as his lover vanished before his eyes held no sway over me. Not that I didn’t feel sorry for him, but that I knew the risks of my rival being brought back far outweighed his desire to be with his mate. I had a job to do, and I couldn’t let emotions impede things.

I was above such things as love and desire.