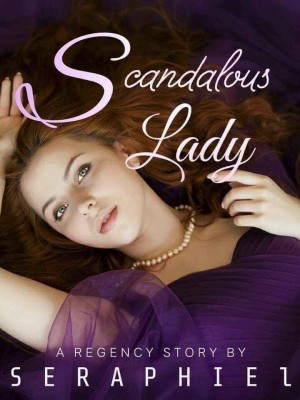 Born a high-ranking duke’s successor, Lady Francesca Chandler was sure of her future, not until the appearance of her stepmother, who robs her of father’s attention. In order to gain his favor, she would intentionally involve herself in petty society scandals, garnering the infamous label of being the scandalous lady. But things get more complicated with the sudden death of her father which put her right over the much loved duchy at stake! Vicious Duchess Carlotta is taking advantage of young Francesca’s minority to ship her off to the long-agreed betrothal before she hits legal age where she can decide on her own. In response, young duke’s daughter pulled a boldest unladylike move. If she can’t get hold of the favor of the Chancellor to nullify her engagement to the man she never met. She would mind less being called scandalous again if that would mean to save her house and her freedom. Throwing her virtue to a rich, wealthy man of her own taste, with a respectable ancient title, was the only prospect available. A rake hell like Lord Syford would definitely do.

“Lady Francesca aren’t you sick of the uncalled attention you got from the ton?”

“Certainly not, Lord Syford. I am a duke’s daughter and no scandal can ever take that from me, not even my stepmother. Perks of having a royal bone rank in my corset, they say.”

“Then, I might as well cause one of the upcoming scandals of yours,” he responded before shutting her cherry ripe parted lips with his. Both hot, burning in passion.

They were in the prince regent’s royal garden. In any minute, one could have barge in and witness the infamous lady’s scandal. But, Francesca couldn’t think less, than the man ravishing her, and the hidden agenda she got under her sleeves.

Scandalous Lady was a lively embodiment of how the intricate streets of Regency London during the 18th Century works, characterized by wrath for power amidst burning passion and desire. This book will draw the reader to take a closer look on how the modern royalties we've known now used to be.

The story took place between 1811-1820 when King George III was seriously ill, making him mentally unable to rule; and thus was temporarily replaced by his eldest son Prince George of Wales, who later formally ascended the throne at the age of 57 on 1820 and ruled until 1830. He was known as King George IV.

Hats off highly regarded ladies and gentlemen, an avid fan of Regency Romance, now turning a writer of it herself, Seraphiel Hwan is the pen name. Welcome aboard to the first ever Regency Book I will be writing! Certain terms might be new and vague, but still incorporated on the book to encompass the historical backdrop.

Rest assured that I will do my part of properly researching about facts and practices of people living in Regency England in the best way I can. Disclaimer, I am not of British origin myself. In fact, I am an Asian, a Filipina to be particular.

If I happen to commit culural insensitive or

faulty contextual interpretation, kindly feeI free to reach out on me on the comment section. It would be much appreciated. You can also share it on any social media platform to help reach out other people of the same interest and cup of tea.

May your lordship and ladyship enjoy the whirlwind ride of Regency Love!