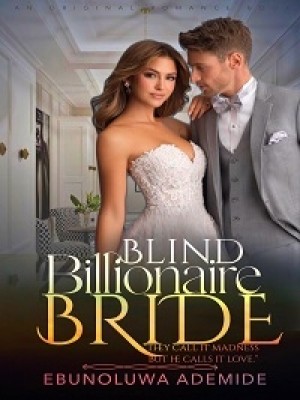 Ria Robert can only see the dark, she is trapped in the dark and not to mention that she has a past she is trying to forget and run from. Her perception of men is cold and cruel. So how can she possibly love a man when she is bruised, scarred and physically blind? Love is the least of her concerns. She only wants her sight, with that she can be a famous designer, the only thing she ever truly desired. As impossible as it sounds, she is ambitious and optimistic. Her life changes when she meet a man and his goal is to bring her out of the dark. Ian Bryant, a billionaire whose business is rated top one in America. He has everything; striking looks, intelligence, riches and women pooling at his feet. What more could a man want? He wants her - The blind lady who intrigued him. The woman whose eyes are filled with pains yet manages to push on. The billionaire finds himself in a roller coaster fighting his primal desires for her, he has a thirst that only she can quench. How will their story play out?

Making an ability out of a disability

The door swung open revealing a well built man at the entrance with a deep frown grazing his face. He was left with no choice than to open up the door after knocking several time but got no response.

“Young master.” Owen called out to Ian Bryant who pretended to be asleep in his bed. “Young master Ian.” He repeated but got no response.

“Good morning, sir Ian.” Owen greeted as he went to the window and pulled up the curtains.

“Shut the fuck up Owen! And get the hell out of my room!” Ian Bryant threw a pillow at his bodyguard but it didn’t get to the target. The eighteen years boy was so pissed.

Ian interrupted him. "Can't you fucking see that I am sleeping?!" He threw his alarm at Owen but he dodged it.

“Please forgive me Sir Ian but the big boss wants to see you.” Owen did well at dodging everything the young master threw at him.

“You are so annoying! Go and tell that old man that I am sleeping.” Ian Bryant commanded his bodyguard as lay back down on the bed.

“But the big boss knows you should be awake by this time.” Owen replied.

“Tell just go and him that I am sick and can't come to see him.” Ian instructed.

“I am sorry young master but I can't tell him that to the big boss.” Owen responded with a straight face.

“You are such an idiot Owen! You should do as I say because you are my bodyguard! You fool!” Ian Bryant hissed out.

“Forgive me sir, I am well aware that I am your personal bodyguard but Mr Bryant pays me.” Owen closed the door and walked closer to the bed.

Ian sat up on the bed and pointed his finger at his bodyguard. “But you should be most loyal to me. You are so annoying Owen!” He lay back down and threw the blanket over his face.

“Sir -“ Owen was cut off by the opening of the door as Mr Jack Bryant walked into the room.

“What are you still doing in bed by this time?” Mr Jack Bryant baritone voice echoed in the room.

“Sleeping.” Ian mumbled but enough for his dad to hear him.

“Get up Ian, today is Lorna's birthday and she is expecting you to be the first person to give her a present.” Mr Jack Bryant reminded him.

Ian knew what’s happening today that’s why he didn’t want to get up from the bed. “Listen dad, I am not a kid anymore. To be honest, I am sick and tired of giving gifts to Lorna every year for no specific reason.” He complained from under the blanket.

Mr Jack Bryant walked closer to the bed and removed the blanket from his son’s body. “Get ready in five minutes.” He said in a commanding tone.

“Yes and look your best. I don't want Mason to take your place in Lorna's heart.” Mr Jack Bryant replied with a serious look on his face.

“Well I hope he takes my place in Lorna’s heart.” Ian pouted.

Mr Jack tucked his hands into his pocket. “Then if Lorna falls in love with Mason instead of you be ready to —“

“Leave the state and stay with Aunt Elise in Idaho or go into the military or lose your inheritance.” Ian completed his dad’s intended statement. He has heard these same words over and over again.

“Exactly. So make your choice this minute.” Mr Jack Bryant uttered in a stern tone.

Ian got out of the bed and reluctantly walked into the bathroom. He choose to give a gift to Lorna rather than go into the military, lose his inheritance or even leave the state to stay with his aunt in Idaho.

Mr Nathan Robert unlocked the door and entered their small house but he saw no one in the living room as expected. “Honey..” He called out to his wife as he motioned towards the kitchen knowing that she might probably be there cooking.

Mrs Madison Robert smiled at her husband when he walked into the kitchen. She wiped her hands on a clean and dry napkin before walking up to meet him. “Welcome home.” She hugged him.

“Thank you.” Mr Nathan placed kisses all over his wife’s face and she giggled happily. “Where is Ria?” He asked about his daughter.

“She is in her room.” Mrs Madison Robert replied.

“What is she doing alone?” Mr Nathan questioned in a worried tone.

Mrs Madison turned away to check on the stew. “Ethan brought his clothes earlier so she is helping him to amend it.” She responded.

Mr Nathan placed his hands on his waist with a furrowed eyebrows on his face. “Oh honey, I told you not to allow her use the needles or even machine to amend dresses.” He reminded her.

“Oh! Come on Natty, stop acting like you don't know Ria. She won’t listen.” Mrs Madison looked at her husband.

“Yes you are right, I know she can be stubborn but you should at least try to dissuade her from doing some certain things by herself like using the needles. I don't want her hurting herself with a needle.” Mr Nathan pointed out.

Mrs Madison shrugged. “Well for me, I don't want her to stop using the needle or learning to use machine. I love what she is doing and you should be glad she want to do something even with her condition.” She countered.

Mr Nathan drew in a deep breathe. “Okay...okay...please just keep an eye on her.” He raised his hands up in surrender.

“Yes I will keep an eye on her.” Mrs Madison replied.

Mr Nathan went to his wife. “Of course I am happy because I have you and Ria in my life.” He said wrapping his hand around her waist. “But guess what?”

Mrs Madison smiled. “Just say it Nathan you know I am not good at guessing.” She pulled away from him.

“Well..well I am done with the inheritance process so the lawyer called me and said I can have access to my own inheritance from next tomorrow.” Mr Nathan said with excitement in his tone.

Mrs Madison screamed and hugged Nathan. “Oh my goodness! This is great news!”

“Yes, once we have that money then Ria can get her eye surgery done. You will get a very bigger space enough to fit in like five to six sewing machines and we will be able to live in a very big house..our dream house then all our dreams will come true.” Mr Nathan stated his plans.

Mr Nathan pulled away from the embrace. “I love you.” He said.

“I love you too.” Mrs Madison leaned up and placed a quick kiss on her husband’s lips.

“We should tell Ria about it too.” Mr Nathan suggested and his wife nodded in agreement.