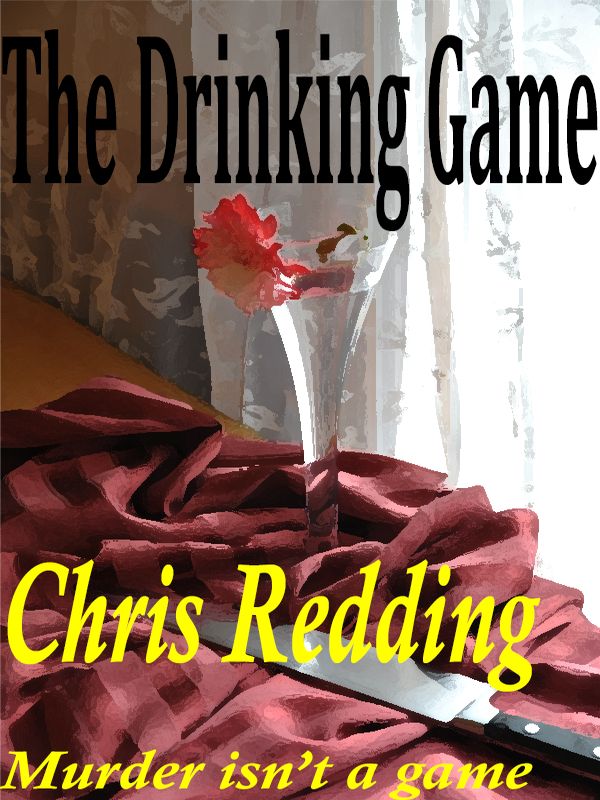 A burned out detective coasting to retirement and an unstable FBI profiler must join forces to prove their mutual friend is not a serial killer. And figure out who really is. The Drinking Game is created by Chris Redding an eGlobal Publishing Creative Signed Author.

The hair on the back of Detective Sean Gaudette's neck stood on end.

Ken Westin, his former partner, had summoned him here and now the man wasn't answering his doorbell. “Ken, cut the theatrics."

An eerie silence answered back. Icy hands gripped his spine and his pulse quickened.

Sean's cop instincts told him all was not well in the state of Denmark. Looking around, no neighbors walked dogs. No one was about that Sean could ask about Ken. He half expected a tumbleweed to roll down the street.

He tried the solid metal door. With a creak it swung open an inch. Not good. Ken never unlocked his front door except to let in someone.

The low hum of adrenaline began in Sean's blood. Looking in the window, he saw only darkness, no movement. Night had fallen a little early with the threat of thunderstorms.

Cicadas yelled as if they needed to announce just how hot it was. Sweat trickled down Sean's back and he wished for a beer to drink and shorts to wear.

“Damn." He contemplated calling for backup, but unless he could get a local cop, anyone from his office was at least fifteen minutes away. What had happened in there?

Flipping opened his cell phone, he dialed the Jenkins Crossing police. When he hung up a patrol car was on the way. The siren screamed to him in the distance.

Squaring his shoulders, he leaned back and kicked open the door. With gun drawn, he entered the house. Movement in the kitchen caught his eye. “Freeze, police."

The click of the sliding glass door closing notched up the adrenaline in his system. Break in?

Footsteps pounded down the wooden steps of Ken's back deck. The open floor plan provided no hiding places, but the bathroom which Sean peeked into on his way to the kitchen. The action of rushing across the room would be suicide if he didn't check for bad guys on his way.

Unfortunately, that gave whoever had just left, time to get out of sight.

Sean turned on the back light, but saw no one. “Damn." Had he imagined it? A breeze rustled the leaves. No other sound reached his ears from the woods.

Closing the slider, the detective turned back to the now even darker house. No boards creaked indicating movement. He swallowed as sweat pooled in his armpits. His mind ran back to another empty house on another dark night and the grisly discovery he'd made. He shook the stressful and unwelcome thoughts out of his brain.

“Freeze," someone commanded from the front door.

Sean's heart skipped a beat. “I'm the one who called you."

Sean approached the uniform with his hands visible. He hoped he was approaching a uniform. The outside streetlight made the man only a silhouette. He hated staring down the barrel of someone else's gun.

When the officer didn't put down his weapon, Sean identified himself, flashing his badge. “I think someone went out the back door. Search the woods behind here."

Still waiting for the cop to react, Sean started up the stairs, thankful his eyes had adjusted to the darkness. Dread tugged at his feet, slowing his steps.

Snap out of it. You have a job to do.

“Ken?" he called, though he no longer expected an answer. He hoped his friend had gone to the bar without him.

His search of the upstairs proved him wrong. Turning on the light of the bedroom Ken used as an office, Sean found his former partner.

“Ken, shit." Jamming his gun back in its holster, he strode across the tiny room and put fingers on Ken's neck.

Sean's eyes dropped closed as he withdrew his hand to call his office. To the person who answered he said, “We have a murder on our hands."

Stuck in traffic on Route 95 near Philadelphia, Jen O'Grady tugged her tee shirt away from her slick body. Jamming a wispy red hair behind her ear, she reluctantly turned on her air conditioning.

“I thought the evening would be cooler," she said to no one.

Rush hour outside the City of Brotherly Love. At least she had a nice, hazy view of the place that William Penn began.

She blew some hair out of her face as the cars in front of her started to move. A few minutes later she passed a three-car fender bender that shouldn't have stopped her progress.

She checked her watch. “Damn, I should have started sooner."

Her cell phone ringing, startled her and she dug into her purse with one hand. Grasping it, she thumbed the phone open and on. “O'Grady."

She expected it to be Ken, her ex-fiancé, wondering why she hadn't reached New Jersey yet. She frowned at his odd summoning of her. They hadn't spoken in six months, not since they'd called off the engagement.

The engagement. Another messed up part of her life. She sighed and realized someone on the other end should have spoken to her by now. “Hello?"

“Who?" she asked, passing a car who had decided the left lane was for going slowly.

Another crank. Top on her to-do list was to get another cell phone number. “Ken's dead?"

Relief swept through her as she was finally able to get the six cylinders of her Porsche 911 moving rapidly.

She clicked off the button and dropped the phone on the leather seat beside her, rolling her eyes. “Nut ball."

The phone rang again, playing the beginning strains of Toccata and Fugue. She picked the eerie tune figuring every time it rang was like whistling past the graveyard for her.

Dealing with murderers and rapists in her job as an FBI profiler, she had developed black humor. Not that she showed it to anyone.

No one shared jokes with her, because they'd never seen her laugh at the office. Instead she had cultivated a reputation as emotionless. In the beginning her mostly male colleagues had left pictures of naked women on her desk to get a rise out of her. When it didn't work, they finally stopped and accepted her for what she was.

Her phone ceased its tune and she sighed. She couldn't even take crank calls seriously anymore. She'd seen too much of what a man could do to a woman to be bothered by some kids playing a game. She wondered where their parents were.

Reaching for the phone again, she dialed the number Ken had given her. He hadn't moved, just changed his number.

The phone rang and rang. An answering machine picked up and Ken asked that she leave her name and number.

With a click she disconnected and dropped the phone again. “This damn well better be good."