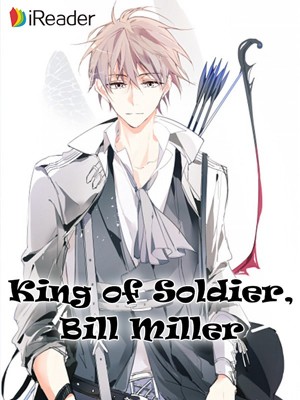 The King of Soldiers was a doctor too. No one was more capable than him! Bill Miller, a soldier who was expelled from the army, returned to the city. After accidentally signed a paper marriage contract with the beautiful CEO of CICB Group, the amazing story of love and hatred began. Beautiful president, violent female police, pretty university student, first love girlfriend, big star, all kinds of beautiful women came into the life of Bill Miller, letting him couldn’t live a peaceful life ...

Winter has quietly passed, the weather at the end of March became worm and the spring breeze refreshed. In front of a building in the city of Prague of Czech Republic, here is the peak of work, a lot of private cars drove into the parking lot of the building.

It is worth mentioning that this building is the administrative building of CICB Group​, a tall 40—storey building with a floor area of 100,000 square meters. It is the leading enterprise of Prague. What's more, CICB Group​ is also one of the top 500 enterprises of Czech Republic.

At the moment, in the parking lot of CICB Group​, Bill Miller​ is wearing a security uniform, with a cigarette in his mouth, lazily leaning against the gatepost of the kiosk, looking very comfortable.

White—collar people went up and down. As they saw his appearance, they spurned and thought that this varmint deserved to be a security guard.

But in everyone's mind, they couldn't help feeling a little out of balance, because Bill Miller​ is tall and straight, even without the muscular impact of fitness his limbs were graceful, and there was a sense of tension and explosive force. His skin was wheat—colored, his eyebrows were like swords, his eyes were like stars, his nose was like gallbladder, and his cheeks were cut like knives. Compared with those white—collar faces, they were very beautiful and impactful, and many young girls would peek at him when they were commuting to and from work.

But as for the identity of the parking lot security guard, the girls didn’t appreciate that.

Now is work time, all the white—collar workers of the group car had been parked in the parking lot, at the moment Bill Miller​ idle nothing, a beautiful figure came from not far away.

Bill Miller​ saw an oval face with beautiful eyebrows and eyes. What a pretty face! Her long hair was styled into an elegant upsweep, which made her neck more prominent long and white as jade. A black OL uniform curved the perfect concavo—convex body outline. Her hip and tits were so pretty and seductive.

The cynical Bill Miller​ had never seen this level of beauty before. So, his eyes turned hot and made a loud whistle.

That was Amy Smith, she had something to do so she just walked to the parking lot, ready to pick up the car, but unexpectedly found a security guard with lust whistled to her.

If you didn't do something fatal, you wouldn't die!

Amy Smith suddenly became angry, however, a figure behind her hurriedly ran over: "Brat, you dare to flirt with our chairwoman!"

What? Bill Miller​ immediately agued. He was unlucky. She was the new president of the group... Amy Smith!

And the woman followed Miss Smith was her full—time secretary. Bill Miller​ knew her, so, in front of the big beauty was absolutely the President n Miss Smith.

Even Bill Miller didn’t know her, but as the newly appointed chairman of the board, he had heard about Amy Smith, who just returned from abroad. She took over her father’s business and helped her father take care of the big CICB Group​. The new president was cold and indifferent, but as the president of the group, all the company staff had to suck up to her.

According rumor, Amy Smith seemed to be ill, and she got a very strange disease... She very hated men, and this, Bill Miller​ personally heard, at the end of a day, a male employee of the company, hurriedly and accidentally touched Amy Smith's arm, thus, he was beaten by the President Smith and severely fell to the ground.

It was worth mentioning that this unlucky fellow was a fat man of more than 100kg, indicating that Amy Smith was a master. After this incident, the male compatriots of CICB Group​ dared not approach Amy Smith within three feet. The unlucky fat man had been in hospital for a month.

Even though Amy Smith hated men, she still made many gay men regarded her as the goddess in their heart, hoping that one day he could save the goddess from suffering.

"Miss Smith, hello..." Bill Miller​ said that embarrassedly. Bill Miller​'s parents begged his aunt's and uncle's cousin to get this job for him.

And since Bill Miller​ leaving the army, he muddled in Prague for more than a year, only to find a job as a security guard, so he didn't want to lose it.

"It 's you!" Amy Smith came along and finally saw his appearance. Her voice sounded like melody, but it was cold, there seemed to be a trace of surprise.

President Smith knew him? Bill Miller​’s heart skipped, but he shook his head. He was just a security guard, how could she know him? He nodded: "Well, I am security of this parking lot, my name is Bill Miller​."

"Tomorrow morning wait for me here with your document and ID card..." Amy Smith expressionlessly interrupted his words, and left after finished her words, leaving him standing there​, even she would fire him, why did she need his documents and ID?

"You are a dead man!" The secretary closely followed, and said this to him when she passed by Bill Miller​.

Bill shook his head, and when people were unlucky, they would stuff their teeth with cold water. At this time, he couldn’t wait to beat himself. But since the boss wanted to fire him, she could do that within just a word, why should him wait in the parking lot? He was puzzled, but since he offended her, he certainly didn't have a good ending.

"Bill..." At the moment, Tom went to his side, patted him on the shoulder: "Take it easy, it is your date!"

That pair of cold eyes made him unforgettable. He just flirted with her, there was no need to treat him like an enemy.

Bill Miller​ finished the cigarettes in his hand, and his eyes became blank. If he was fired tomorrow, what could he do for living.

One day shift down, Bill Miller​ came back to their own urban corner of a rental housing, the house rent in Prague soared, even the house he lived was less than 10 square meters and it was a humble small house, he should pay 500 dollars for a month's rent.

Bill Miller​ was lying in bed, thinking about today's things, couldn't help but feel sad. That was a good job, but he was about to lose it.

In fact, money was another matter, mainly Bill Miller​ just integrated into the life when security, but he was about to lose it, when he came back to his hometown from the army, Bill Miller​ suddenly didn't know what to do, that kind of confusion and loneliness almost let him commit suicide.

Thinking of the brothers in the army, thinking of all kinds of before, Bill Miller​ looked very gloomy, he fell asleep directly.