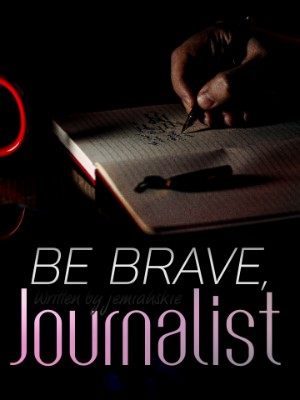 Astrid Chua, an aspiring journalist, believes that she has the courage and capacity to change the world- or at least the City of Isabela where she lives. She has a principle of her own, a perception and creed embedded in her heart, but what would she do if she has to convict someone close to her heart? Will she hold onto her principle and creed she swore on, or will she let her emotions and sentiment to resist the judgment she believes in?

My family and I are having breakfast today at the dinner table while the television is on because I'm looking forward to the current news.

I immediately looked at the television and was not even surprised by the outcome.

"Your words, Alexandra," I warned.

"What? It's written all over the news," she said.

"Prove to me your proclamation," I argued.

She didn't respond further and I felt satisfied with her defeat.

My brother who's on my right side looks at me and gave me his intimidating gaze.

"What can you say? Do you mind rationalizing the context of the news?" Alex, our brother, asked.

I drink my water first and gently put it down before I began demolishing my sister and brother.

"Rianne Pablo, a widely known journalist, has been accused guilty in the case of Cyber Libel or the case of damaging statements made about another person through e-mail, blogs, web sites, or any other internet-based communication medium. Rianne Pablo is part of the largest broadcast team in the Philippines along with the most influential journalist in Asia, Olivia Fernandes, who was impeached as well with her and now facing 10 years of imprisonment." I inducted.

"Their broadcast team is one of the few local sites to openly criticize the President's administration, its brutal war on drugs and extrajudicial killings, which has claimed thousands of lives. The said journalists were accused of biased news against the president's administration, and the President himself and his supporters have charged their broadcast team, and their site, of reporting fake news," I said.

"If you were Rianne Pablo or Olivia Fernandes, would you do the same? Would you be brave enough to fight against the president's administration, the President himself, and his supporters?" Alex asked.

"I highly doubt it. Ate is afraid of commitments." Alexandra said.

I ignore her antics and focuses on my superior agenda.

"I want to be practical, It's hard to decide whether I should propel it myself and risk my life or let other journalists raise it instead and let them face the government on their own," I said.

"I'll ask you one more time, would you be brave enough to face the government?" Alex argued.

"LET ME EXPLAIN," I exclaimed.

Alex looks at me, finally waiting for my justification.

I glared at her the moment I caught her silently snickering.

I sighed before I proceed.

"Isn't it intriguing, criticism is a part of democracy but when higher authorities are being attacked, the press freedom becomes susceptible. Authorities tend to sue journalists who they accuse of publishing false information. They are charged with a hundred thousand money, arrested, and put in jail. Something I remark is that the government uses courts to take action to stop journalists from writing on the actual condition of its people because they don't want their enigmas to reach the international community," I said.

"Sad but true," my sister commend.

"You haven't answer my question yet," Alex said, "Are you brave enough to face the consequences of your said profession?"

"Rianne Pablo and Olivia Fernandes are one of the greatest and widely known journalists, but because they were unfavorable of the decision of higher authorities and raises their opinions for the people, they are being condemned," I said.

"My fellow journalists are pursuing the most prominent aspect of journalism, the journalist's creed, and I am proud of them," I said.

I raised my fork with a piece of hotdog in it.

"The reason why our country needs journalists are because the voice and eyes of the public are them. I urge the public and all media practitioners to defend press freedom and the right to speak truth to power," I concluded.

I gently put down the hotdog and ate it.

"How old are you again?" Alex asked.

"Yet I am a police officer who merely knows anything about that," he said.

"You should practice, I might see you in court one day," I teased.

Alex almost burst out the water in his mouth.

He was about to argue back when his phone rang.

He pinches our cheeks first before directing to the station.

I and my younger sister are at the secondary level, the only difference is our two years gap. On the other hand, our eldest brother is an assigned police officer in the town of Isabela, the municipality we live in.

I keep noticing my sister's stares back and forth until I got irritated.

"On what aspect are you talking about, we are not alike," I said.

"I mean as a journalist," she said.

"Anyone could be a journalist, but not everyone is brave enough to pursue it."

I ran towards the front door of the municipal library, and when I finally reached it I gently walked inside. A municipal library is a huge place for massive people who wants to enjoy numerous books. It provides a peaceful atmosphere and a light-hearted feeling.

I often dwell here after school dismissal to read old newspapers, but my purpose today is different, I'm here to study for the exam tomorrow.

There are multiple people here, mostly students from Pioneers International, who have the same agenda as mine.

I can barely concentrate at home, Alexandra's voice is irritating as she memorizes different terms! She's too loud and I can't manage to focus.

So I was the one who adjusted.

I search for space and luckily I found a vacant. I placed my reviewer, put on my headphone, and begun studying.

Music helps me to study.

I look up and notice a guy holding a newspaper. There are also numerous newspapers on the table, and it almost covers the entire table.

I read the nameplate of the newspaper he's holding and it indicates the official name of the news publication of the municipality of Isabela.

It's the popular news establishment of the town of Isabela.

I look back to my reviewers and repeatedly memorize the different terms again, not until my phone rang and the music suddenly stops.

I immediately open my notification bar and notice a live video from a near residence.