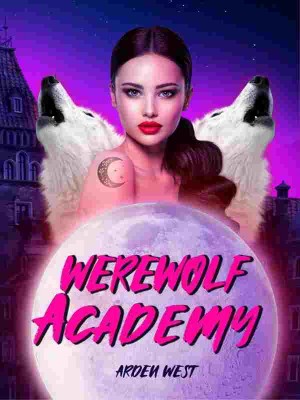 Werewolf Academy The Alpha And Luna

Hailey Woods gets marked by a wolf on her sixteenth birthday. Now a wolf-pup, she's forced to enter the Academia of the Moon, where people like her train to become full-functioning werewolves and manage their powers. Now deemed a freak by her family, friends, and boyfriend, who abandons her, she has no other choice but to try and adapt to her new life. Once she arrives at the Academy, she learns she's an outcast—even among her kind. It turns out the spirit of Huntress Diana has special plans for her, and there's another girl that can't handle that Hailey's getting all the attention. Not to mention, why does she become all tingly when the gorgeous Elijah Ledger, the future alpha, is around?

There’s nothing worse than getting stuck in detention on a Friday afternoon—especially if it wasn’t your fault.

I twisted around in my seat to pin Luca Greene with a glare, promising all kinds of wrath on him. In exchange, he ruffled the obsidian rat nest on his head and grinned at me.

I bared my teeth and flipped him the bird.

"Hailey Woods," Mrs. Whit barked. "You just earned yourself another Friday afternoon with me."

I groaned and turned to face the front, catching a last glimpse of Luca's punch-me grin. I held on to either side of my wooden desk, mapped out in doodles. Most of them were my handiwork, such as cute animals and blossom designs etched in a ballpoint pen to pass the time.

Tilting my head up, I offered the old woman a phony, sad look. A long chestnut curl fell into my face and tickled my nose. I blew it away, my facade giving way to a frown for a split second. With my fingers, I swept my hair back and resumed my misery act.

With my large, honey brown eyes, I knew I was good at pulling it off.

It is a pity that the one teacher immune to it happened to be the one who was hosting detention today.

Mrs. Whit had a stern, pinched expression on her face, her russet-painted lips set in a tight line as she looked at me through her spectacles.

"Go on, and we can make it every Friday for the next month," she continued. "You’ve gotten away with your nonsense for way too long."

I bit back the retort that threatened to escape and forced a smile instead. "I’m sorry, Mrs. Whit. I’ve had a bad day."

"It’s my birthday today, and my parents forgot." That part was true.

Her brows shot up. "As much as that sucks, and, as much as I empathize with your unfortunate circumstance, I’m not responsible for your happiness, Miss Woods. Nor is it in my control how you decide to act during class and what you choose to do with the school rules. What counts for one student counts for everyone else, whether it’s their birthday or not."

I sighed, leaning back in my seat. "I wasn’t looking for a way out of detention," I lied. "Just wanted you to know I’ve had a bad day."

My hand curled into a fist. I was so going to ruin him. It was his fault that we were in detention.

I minded my own business in English class when he, out of nowhere, decided to stop by my table and gawk at me like some freak.

No, seriously. He didn’t say anything. He just stood there and stared at me, looking like he was possessed or something.

Then, out of nowhere, he grabbed my arm and dug his nails into my skin, hurting me. I didn’t do anything to him. I’ve never talked to him before today, and he decided to attack me. I tried to defend myself and got in trouble for it. How unfair was that? Wasn’t the school supposed to protect its students against bullies?

Kelsey, my nemesis since kindergarten, shot me a smirk. Unlike me—who never had detention before in my life—her favorite pastime was trouble and gossip. I was hoping to evade her this session, but of course, luck wasn’t in my favor today.

The second Mrs. Whit glanced down at the trashy romance novel clutched inside her hands, Kelsey tossed a crumpled piece of paper at me. I picked up the note and straightened it.

She wrote: Guess whose mommy I saw getting into the car of a married man? Does she pay you her shares? Or do you too take part in her crimes?

I sighed and picked up my pen. I should have seen this one coming. Mom had a drinking problem and an even bigger problem when it came to men. Dad was the male version of her and couldn’t care less what she’s up to.

They never fight. It should be a good thing, but to me, it wasn’t. Their lack of care was what bothered me the most.

I never got scolded for being late or lectured for skipping dinner. Mom signed my detention slip without batting a lash, waving me off and telling me to stop interrupting her chat session with her bestie on her phone.

I pressed the tip of the pen to the paper and began writing: Is your life so uneventful you just need to meddle in other people's lives?

I peered over my shoulder to pin Luca with a warning look before passing the note back to Kelsey. If he was going to rat me out, I made sure he knew he was in for some trouble.

I was no one’s pushover.

I still couldn’t figure out what provoked him to get physical like that with me. Whichever stupid excuse he had—or didn’t have—I was so going to get my revenge.

I barely twisted to face toward the front when a ball of paper hit me on the forehead. Kelsey spat out a laugh, which she tried to muffle behind her palm.

Mrs. Whit momentarily glared up at Kelsey before her eyes narrowed onto her book.

I shot Kelsey a scowl, unwrapped the paper ball, and read the note: No. But going home with other students’ married parents is disgusting. She must be paid much less than your basic hooker, considering the state of your trashy clothes. FYI: I’m outing you and your mommy. I've got a lovely surprise in store for you.

I couldn’t hold back a scowl and wrote: Knock yourself out.

I threw the note at her.

This time as Kelsey turned, I lifted my hands to catch the ball of paper. However, Kelsey froze and stared at me with a mortified expression. “Holy crap,” she shouted, drawing the attention of the entire room, including Mrs. Whit, whose mouth dropped open.

“What?” I blinked, confused.

“Your eyes. Face...arm. Freak!” She lifted a hand and pointed at me. “You’re turning into a freak!”

I frowned down at my arm. “What?” I couldn’t see anything wrong, not until I lifted my arm up from my desk and screamed.

The world around me became a blur, and I was sucked into a bubble of panic.

No. No. No! I stuffed a hand into my backpack and rummaged shakily for my compact mirror. When I found it, I pulled it out and flipped it open. When I glanced into it, it felt like the floor was about to give in beneath me. My eyes were glowing. A horrendous, unearthly blue had taken over the earthy browns of my irises. My skin was marred with heinous veins.

This could not be happening.

I had the mark of the wolf.

No matter how many times I tried to wipe off the inky vein formation imprinted on my skin or how I rubbed my eyes, the appearance of doom didn’t go away.

The ugly, black veins still crept around my forearm and face, which the wolves called ‘the gift’ from the huntress. Diana—we, the normal people, called it the end.

It was my end.

When I finally composed myself, I found my nemesis staring at me as if I’m a monster. The room had fallen silent to a point where you could hear specs of dust hitting the table. Maybe it was my imagination?

My eyes flicked toward the golden specs illuminated by the sunlight. Each time a tiny particle bounced against my desk, I could hear it.

There was an audible intake of breaths when I bounced up onto my feet, legs shaking. I half-stumbled toward Luca’s desk. “What did you do to me?”

He blinked calmly. “I don’t know what you’re talking about.”

“This,” I cried out, lifting my arm and shoving it into his face, then pointing at my own.

“Whoah,” he leaned away from me. “That’s one heck of a tattoo you’ve got there. Nice contacts, too.”

I scowled, pulling back my arm. “Don’t play dumb. It wasn’t there earlier. It showed up right after you practically manhandled me in English. You’re one of them, aren’t you?”

He shrugged. “I have no idea what you’re talking about.”

“Well, that’s unfortunate,” said Luca. “I can’t do anything about that. You’ve been chosen, Hailstorm.”

“Stop calling me that,” I snarled. “And don’t give me that chosen crap. Undo this, now.”

“I can’t,” he shrugged. “The spell was sealed by our great ancestors.”

“Ancestors?” My brows furrowed, and I shook my head. “What crap are you even babbling about? Whatever, I don’t care. Get rid of this ugly thing!”

“Nope, will have to do, Thunderstorm.” He casually pushed back his chair and began gathering his things. He didn’t say anything until he slung his backpack over his shoulder. “Would you look at that?”

I turned around to see what he was looking at. The clock, I think. It was a quarter past four.

“Looks like detention is over,” he smirked. He lifted a hand, patting my shoulder. “Looks like the Academia of the Moon is howling your name, little pup.”

Just like that, he spun around and walked out of class.

Mrs. Whit was the first one to say something. “Hailey,” she croaked. “Would you like me to phone your parents?”

I swallowed down the ginormous knot forming inside my throat and shook my head. “No,” was all I managed.

Ignoring all the stares, I rushed to my desk and gathered my belongings with shaky hands. I dropped my pencil case twice. The third time I tried to shove it into my backpack, I dropped it again.

This time I didn’t bother with it. I left it there, zipped my backpack shut, and flung it over my shoulder.

“Hey, wait up!” I heard Kelsey call out after me, but I kept running. I didn’t stop until I locked myself inside a cubicle inside the girl’s bathroom and burst into sobs.

I tried to silence them with my hands, but anyone could still hear my cries.