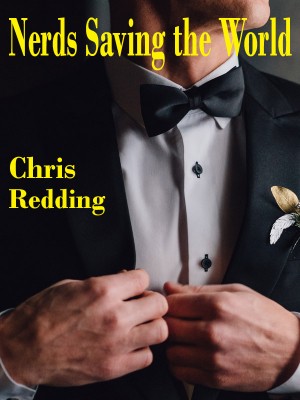 A woman needs the nerd she left behind to find her husband when she is threatened. An FBI agent is tasked with protecting a woman who does not want to be protected. Nerds Saving the World is created by Chris Redding an eGlobal Publishing Creative Signed Author.

Madison West walked down Main Street, in the town of Mill Hall, toward the one person who could help her. The one person with such a unique skill set that no one else could duplicate. A skill set acquired doing things even she didn't have enough security clearance to know about.

Who would have thought he could be in Small Town, New Jersey? Why wasn't he doing something for the government instead of helping his brothers run a two-bit detective agency? That, Madison thought, was probably a story for another day.

Right now, she needed him for a case. Her last case. After this, she wasn't going to work for the government anymore.

Not that he would know her real agenda. No, she had to play this as if she was just looking for Charlie.

What she really couldn't tell him is that long ago in college, she'd chosen the wrong man. She still had feelings for him and hated that she had to use him for this case.

With the sun in her face, she strode down the sidewalk looking for Quincy Detective Agency. She found it in a brick building that stood apart from those on either side, creating two alleys. She ducked into one of them to think once again about what she would say to Peter Quincy when she saw him for the first time in, well, since she married her husband.

"He just has to help me," she said to the empty alley.

Then a man rounded the corner, slamming into her.

The way the man slammed into her, she knew it wasn't an accident.

She turned to give him a good Jersey Girl dressing down, when he grabbed her arm. He jerked her close. She looked up into deep-set eyes that held no soul. Her snarky retort died on her lips.

“We want the package, Madison."

Her heart jumped into her throat. Holy crap. How did he know her name? How did he know about the package? She yanked on her arm trying to get free, looking around for witnesses.

No one else walked this stretch of the sidewalk. Odd since it was lunchtime. Maybe this man made this happen. His blocking of the road meant power.

Turning back to him, she asked, “What package?"

Madison wanted to snarl at him, but she needed to play the innocent, so she shuddered instead.

“The one your husband sent you," he said in a voice that spoke of years of cigarette use.

“I don't have any package." Her words tumbled over themselves as he gripped her tighter. His hot, spicy breath wrinkled her nose.

What the hell was Charlie into? Why did he send her that package? Damn him. She would like to give Charlie a nice roundhouse kick to his ass, but after she dealt with this asshole.

He shook her. Her teeth rattled. She hated acting like a damsel in distress. She had to assume this guy knew nothing going about her except that she was married to Charlie. Her dossier wasn't available in a Google search.

“You better have it when we contact you again." Just as quickly as he'd snatched her, he let her go. “We're watching you."

She swallowed what little fear he inspired in her. She changed her tack. Madison knew how to deal with him. He probably did know she received the package. What he didn't know was that she'd lost it. Rookie mistake on her part, losing the package, as if cloak and dagger hadn't been her living for the past ten years. “I'll get it."

While he stared at her in relief she stomped on his foot. When he doubled over, she kneed him in the face, then raced down the street. Not exactly what she'd been trained to do, but it worked. She pounded her fists on the first door she came to.

Thankfully it was the one she was looking for.

Hammering on the back door brought Peter Quincy's head up. Right into the shelf above his work station. He only did that thirty times a day.

Rubbing the spot where he'd surely have a bump, he said, “Damn. Can't you guys remember your own pass code? Really. It's all of our birthdays plus our parents' anniversary."

He wiped his hands on his denim jeans and walked across his work room. The other shelves held the electronic guts of various computers. Each in their rightful place. Each at his beck and call for whatever he was working on. All the items sat in a container with a printed label on it.

The place had been quiet and he enjoyed that time the most.

All the employees of the Quincy Detective Agency went out to lunch to celebrate the ending of a big case. Peter planned on catching up, but then he'd gotten involved in a new invention.

They would bring him something from the restaurant.

He pushed non-existent glasses up his nose, having forgotten he'd worn contacts today. An ex-girlfriend suggested them. She'd left him in the dust long before he could think to purchase them.

Now that he had, but he still felt glasses sliding down his face.

A glance at his computer screen told him the knocker was not any of his colleagues. In the image from the surveillance camera installed in the alley, a woman glanced over her shoulder.

An attractive woman from what he could see.

His eyes narrowed. Who could she be? The woman was blonde and petite. The resolution wasn't as good as he liked, but the new monitor was on order. If he'd remembered to order it. He needed to start writing things down.

Sighing he pushed an intercom button. “The front door is on Main Street. We don't let anyone--"

“But you're not allowed—“

The hair on the back of his neck went up. She was truly in need of saving. Without hesitation he walked over to the door and unlocked the door. “Come in."

She rushed into the room. Right into him. Her momentum would've knocked down a smaller man. “Oh, thank you."

She glanced over her shoulder at the locked door.

Q, as his colleagues called him, wished one of the real detectives was here. He was just the gadget guy. His days of cloak and dagger were long gone. And those days hadn't ended well. Men had died because of him.

That's when he realized who she was. Oh. My God. He'd never forget his first love. A flood of feelings he'd thought long dead washed over him. Madison. Why here? Why now? Why her?

He didn't know which question to ask first. And why was some guy after her? Her eyes widened as he continued to stare at her.

Then he thought of something he didn't want to remember and that her visit would set off a chain of events he wouldn't have control over. He wanted to run screaming from the office.

Something her father had said to him at Madison and Charlie's wedding. Something about the mistake she was making and why Q should've been the groom. Some gibberish about Q being chosen, but Madison had chosen Charlie.