Home/ Wrong Jade, Right Wife! Ongoing
In the name of my sister, I married the hottest billionaire. 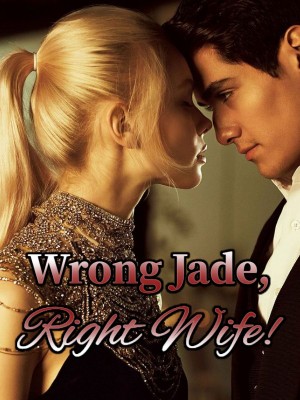 Huo Miao and Ye Manxi were childhood sweethearts. When they met at first time, Huo Miao sent Ye Manxi a precious jade. However, Ye Manxi was a mute, and she was bullied by her stepsister, Ye Lyuhe. Ye Lyuhe even took away Manxi's jade by force. Therefore, years later, Huo Miao, the heir of Huo Group, mistook Ye Lyuhe as his childhood crush because of that jade. And they fell in love. When Ye Lyuhe was about to marry Huo Miao, Huo Miao was blind because of an accident. Then Ye Lyuhe refused to marry him. Having no choice, she forced Ye Manxi to marry as her substitute. Ye Manxi agreed. In her sister's name, she married her beloved man...

The gown, which was decorated with pearls, was thrown from upstairs and happened to hit Ye Manxi's face. She caught the dress and walked into her elder sister, Ye Lyuhe's room.

Today was the day that Ye Lyuhe married Huo Miao, but she had changed her mind.

Her father, Ye Zemin, was circling around Ye Lyuhe anxiously.

"My dear daughter, even if Huo Miao is blind and he has lost his power now, he is still a member of the Huo family. We can't afford to offend him!"

Ye Lyuhe smashed all the things that she could reach to the ground hysterically, and the room became a mess.

Her mother, Chen Mulan, chimed in, "If you don't want to marry, then so be it. How could someone like Lyuhe marry a blind man?"

"The car is waiting outside!" Ye Zemin stomped his feet anxiously. "My dear daughter, you can't let me marry him, right?"

Ye Lyuhe looked up suddenly and saw Ye Manxi, who was standing at the door.

Her eyes lit up immediately. She pointed at Ye Manxi and shouted, "Yes, her! Let her marry him!"

Ye Zemin turned around and saw her little daughter standing at the door, "But she can't talk!"

"I have never spoken in front of Huo Miao. He always thought that I was mute!"

Ye Zemin asked in surprise, "Why?"

"Dad, please don't ask so many questions. It's a perfect match for a mute to marry a blind man! She's more suitable than me!"

Her stepmother's eyes lit up and said, "I think this is a good idea, honey." Chen Mulan, Ye Manxi's stepmother, nudged Ye Zemin and continued, "Anyway, Huo Miao is blind. One of them can't see, and the other can't talk. Isn't that perfect?"

Ye Manxi clutched the dress tightly, each tiny pearl was pressing against the palm of her hands.

Then, her eyes swept over the crowd calmly.

When it stopped at Ye Lyuhe, she avoided Manxi's gaze guiltily.

Before Ye Zemin could speak, Ye Manxi showed him an 'ok' gesture.

Then, she returned to her room to change into the gown.

But it didn't matter, she was the one who would marry Huo Miao today.

Even if he was blind now, Manxi would not hesitate.

The gown was not very suitable for her. It was a little bigger, but it didn't matter either.

As long as she could marry Huo Miao, she wouldn't mind.

Ye Manxi walked out of the gate of the Ye family and got in the car.

The car started and drove away, heading for the Huo family's villa in the suburbs.

There was no wedding or ceremony.

After that, the car stopped in front of an old villa. Ye Manxi got out of the car, pushed open the rusty iron gate, and passed through the neglected garden. Then, she stood at the door of the villa.

A thin middle-aged woman in her forties opened the door for her while munching on melon seeds. As soon as Manxi entered, she was choked by the dust in the house.

Under the sunshine from behind, Ye Manxi looked around the villa.

The villa seemed like it was built dozens of years ago, the decoration and furniture inside were all from many years ago, and there was a rotten smell in the air.

There was a lot of dust and everywhere was covered with dust. Had this a place been unoccupied for many years?

The middle-aged woman spat out the melon seeds and said slowly, "The young master is in the second room upstairs."

Ye Manxi walked up the stairs carefully. The wooden stairs had been damaged because they had not been repaired for a long time.

Then, she heard the middle-aged woman snort behind her, "The bride is pretty, but unfortunately, she married a blind man!"

As soon as the woman finished speaking, she saw Ye Manxi suddenly stop on the stairs and turn around, staring at her sharply.

The middle-aged woman shut her mouth guiltily and turned around.

When Ye Manxi went upstairs, she heard loud noises coming from inside the door.

"Guys, if you give us rewards and double-tap the 'like' button, I'll let the former CEO live broadcast him eating sh*t!"

"Guys, you don't believe me? Look, isn't this the CEO of the Huo Group, Huo Miao?"

"The reward is more than 1000 yuan. Half an hour later, the CEO will broadcast live and eat sh*t! Hahahahaha..."

Ye Manxi pushed the door open of a sudden. In a dusty room, two young men were taking photos of a person's face with their mobile phones.

The man was wearing sunglasses and sitting on a worn-out rattan chair by the window. He was wearing a white button-up shirt, and the cold wind was blowing in through the window without glass.

Today was the 28th of December, and it was freezing cold.

The man's face was pale due to the cold wind, and his lips were dry. The sleeves of his shirt were rolled up too, revealing his pale skin.

Although he looked like this, his face was still as handsome as before.

He was facing sideways and sitting there like a stone statue.

In Manxi's eyes, he was no different than he used to be.

The only difference was that he had a pair of sunglasses on his face now.

She still remembered his bright eyes in the past, like a pair of a beautiful amber, pure and mysterious.

The other two young men were so loud but he seemed like they had nothing to do with him at all.

Ye Manxi's appearance stunned the two young men. One of them then asked, "Who is she?"

"Huo Miao is already like this. What's the point of hiring so many servants?"

They continued to take photos of Huo Miao with their mobile phones. After that, one of them said, "What's the point of taking photos like this? Why don't we take off his clothes?"

"That won't do. The platform will block us!"

"Why don't you go to the bathroom and get some sh*t to put it into his mouth? Like that, our viewers will rise."

Anger filled Ye Manxi when she heard that. So, she quickly walked over, grabbed one of the men's wrist, and threw the phone in his hand to the ground.

The man was furious, "Who do you think you are? Don't think that we won't do anything to you because you are a woman!"

"She's pretty good-looking. Why don't we take photos of them both?"

The two of them smiled maliciously.

"Sir," The butler stood at the door and smiled, "Why don't we call it a day? After all, today is our young master's big day."

"Oh," One of them walked around Ye Manxi and said, "She's pretty, but my cousin can't see her. It's such a pity."

Their annoying laughter echoed in the empty room, but Huo Miao sat still all the time. He seemed to be looking out of the window in the distance. In fact, his world was dark and he could see nothing.

"My dear cousin, did you hear that? Your wife is mute. From now on, you, a blind man have a mute wife, how perfect!"

Suddenly, the other guy reached out to grab the sunglasses on Huo Miao's face and threw them aside with a laugh, "You're blind, stop pretending."

"This pair of sunglasses is too heavy. Huo Miao, why don't we draw one for you? You don't need to take it off even when you sleep with your wife. Hey you, there's ink over there. Hurry up and bring it over to me!"

The second cousin took the ink and opened the cap. He looked around for a paintbrush enthusiastically and said, "I'll draw for him."

"Don't draw, it's so troublesome. You can just splash it on him directly," The eldest cousin took the ink and raised his hand, ready to splash it on Huo Miao's face.

Then, Ye Manxi rushed over as fast as she could...