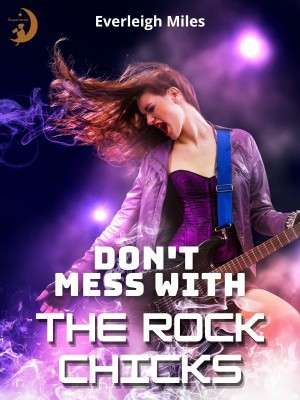 Don't Mess With The Rock Chicks

But Owen. You can’t just quit your job, sell your house, and run away with a band. People just don’t do that. When her childhood sweetheart Owen breaks off their engagement, quits his job, and sells his house to pursue a career as the lead guitarist of a band, Emily’s world comes crashing down around her. Owen was, after all, her best friend and always had been. They had grown up next-door neighbors, gone to the same school, the same university. They had even bought houses next to each other. They had been each other’s first for everything. Absolutely everything. There had never been anyone else, not even for a moment. Just as Emily begins to find her feet again and form her own plans, Owen’s backup singer calls in sick, and Emily steps in to save the day. Soon she finds herself swept up in a crazy ride to the top of the music industry which might just save her relationship with Owen or end it completely.

“I don’t want to get married.”

Emily stared at Owen in shocked surprise. She had just returned from wedding dress shopping, excited from having found The Dress and a little tipsy from the champagne she had shared with her bridesmaids after putting down the deposit, and she was sure Owen had just told her that he did not want to marry her, although that was just… not possible.

Owen was her best friend. They had grown up next-door neighbours and had gone to the same school. They had taken guitar lessons together, played in the same soccer team, and helped each other with homework. Every childhood memory she had, featured Owen through the various states of childhood, from sweet faced little boy, lanky adolescent, through to heart stopping adult.

They shared a birthday month.

Owen had first proposed to her when they were eight. They had been each other’s first for everything… First kiss, first touch… Absolutely everything. There had never been anyone else for Emily… Not physically, not mentally, not even for a moment.

They had gone to the same university and had shared a flat, living like a married couple, as they worked their way through their respective degrees, whilst all their friends had been falling in and out of love, and navigating the hazardous social cliques and after parties. They were the lucky ones, who had found each other early, and had skipped all the bull-shit of broken romances and bad dating experiences.

Once they had graduated and started work, they had bought houses next door to each other, living in one and renovating the other. They spent every spare moment they had renovating the house next door so it would be ready to move into after their wedding, intending to rent out the one they were currently in as an investment.

They joked that if a relationship survived renovating a house together, it would survive anything…

“I am sorry,” she said slowly setting her handbag down on the kitchen bench where they had once burnt a ring into the surface when they had first moved in.

Cooking pasta, she remembered, and drinking red wine, and one thing had led to another, until Owen had stripped her underwear from her and lifted her onto the kitchen bench, his jeans sagging off his hips, her heels digging into his buttocks and her fingers tangled in his hair as they had f-ked like teenagers, not noticing that the pasta was overflowing. Owen had burnt his hand rescuing their dinner, and they had laughed as they applied ice, not noticing that the pot was scarring the countertop in memory of their moment of love.

It was just simply not possible that Owen did not want to marry Emily.

She swallowed, her mouth suddenly dry and her throat thick. “I think I misheard you.”

“Emily,” he was sad and gentle, and his glossy, dark hair was in disarray as if he had been running his fingers through it whilst waiting for her to return, something he did when stressed. His face was poetically beautiful in his empathy, the balance of features perfect, his skin flawless with just an edge of stubble just beginning to show through, and his blue eyes striking against the darkness of his hair and the olive of his skin. “I don’t want to get married. We haven’t lived life yet. We have never been with other people so how do we know that we are right together? Everything we have done it has been together. I want to… experience things that are a rite of passage for most people, and you and I have sort of just skipped over.”

“He wants to get drunk and hook up with random strangers,” Emily’s sister, Megan, translated harshly when Emily called her after a crying binge in the spare room, where all the wedding bits and pieces were being kept. Confessing to her sister that the wedding was off whilst surrounded by the cork boards on which she was keeping track of décor ideas, wedding magazines, notepads, the folder where she was keeping the receipts, and the photos she had selected of her and Owen to be made into a photo-board at the event, was another level of sadness, Emily thought.

There was the time as children that they had eaten themselves sick on blackberries, the year they had made forts in their back garden, school camps, high-school performing at the school concert one of Owen’s songs, graduating, holidays skiing, painting the house when they had both spent days picking paint from their hair and had joked that the grey-look gave them insight to how they would look growing old… Oh, the heartbreak was unbearable.

Owen had taken a suitcase to the house next door, and the wardrobe was bare of his clothing. She had not looked further yet, but she suspected that he had stripped the whole house of his possessions whilst she had been out, looking for the right dress to marry him in.

“Or he’s met someone at work,” Megan was not helping.

“That is not Owen, though,” Emily protested. “Owen just is not like that.”

“Next door. He has moved in there.”

“Didn’t waste any time, did he?” Megan was angry on Emily’s behalf. “Planned it. Knew you would be gone all morning. Kissed you a sweet goodbye at the door when I picked you up knowing where you were going, without a hint about what he was planning… There is someone on the side.”

Megan was off men after the last one turned out to be a dud, playing at being single and dating Megan, but, after six months, shying away at further commitment because ta-da! There was a wife and three children at home.

Emily did not think Megan’s advice was unbiased. Just because Craig had turned out to be a waste of air, did not mean all men were the same. Owen just was not like that. She knew Owen. He was like an extension of herself, another limb, a second heart.

“I guess he has been a little… distracted recently,” Emily leaned her head back against the wall. She sat in the corner between the closed door and the wall, as if to prevent Owen from entering – but he had not even tried. Tears ran down her cheeks and dripped off to create tide marks on her t-shirt. She had stopped trying to mop them up, the pile of tissues beside her was testament to how fruitless that endeavour was. “Between work and renovating next door, I just thought… he was stressed, you know? And weddings are always a bit stressful…”

“What you need to do is get all glammed up, put on something sexy, some killer heels, and come f-k me eyes, and go out,” Megan decided. “After he has spent the night worrying about where you are and who you are with, he will regret his cold feet. It is Owen, after all. He has been devoted to you since you both were six years old.”

“He didn’t say we were over… Just that he didn’t want to get married.”

The doorbell rang and Emily almost dropped the phone in her haste to stand, pushing herself up the wall and brushing down her clothes frantically.

“The door,” Emily gasped into the phone, breathlessly. “I will speak to you later.”