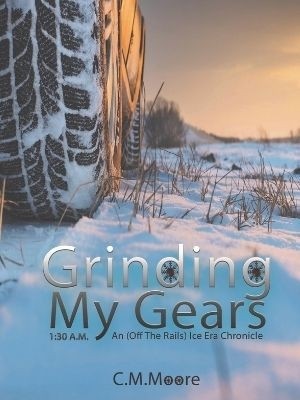 Adam, aka Gears, is a brilliant scientist, doctor, and the creator of the water bases that all underground dwellers use to survive. His family and friends would give him anything he desires. The world is at his feet. But for all his good fortune, the one thing Gears wants he can’t have. A long and healthy life. As he faces his slowly worsening heart condition, he meets an unlikely savior in the form of Luna, a member of a rival organization known as The Originals. Luna is part of a group that is out to see the destruction of everything that Gears has built. Even though she is connected to a world Gears can never be a part of, she risks her life to meet him and save him from death. The two of them set off on a road trip that neither of them can evade, and have no idea if their journey will lead to a happily-ever-after or catastrophe. Luna’s illogical ways have Gears questioning everything he thinks he knows about life and love. But she is his only hope for survival before the final beat of his heart.

“Love is the bridge between you and everything.” ~ Rumi

There were a lot of things he could handle, but congestive heart failure wasn’t one of them. Especially since it was his heart that had decided it didn’t want to beat anymore. For the first time in his life, Gears didn’t have any answers.

“Doctor Gears… I hate to tell you this, but….” The doctor hesitated. Gears recognized that hesitation. That was the same pause he used when giving bad news.

“Just call me Gears,” he said to fill the silence of the other doctor’s exam room. He wished he was anywhere but here.

“It’s getting worse. What you’ve been doing hasn’t resulted in the improvements you had hoped for.” Doctor Dana picked up a neat stack of medical documents off his desk. Gears’ name and information were printed in bold lettering on the top of the first page.

Gears didn’t respond. Instead, he decided to get dressed. After pulling his sweater over his head, he picked up his thick coat while he shoved all his emotions down. He’d never really gotten the knack of dealing with turbulent feelings. He preferred logic, levelheadedness, and practicality. He ruthlessly sucked down the fear and panic. All he needed to do was— nothing came to him. He didn’t know what to say or do. He was dying. Dana hadn’t said that, but that was what he meant.

“I’m planning on going to H.S.P.C. Headquarters in Dallas.” Gears tugged on his long, tan down coat as he slid off the sterile metal table. “This information won’t change that.”

“I think that’s a good decision. I’ll be there to help you.”

“I don’t need anyone. I’m a doctor.” He snapped at the other man as he snapped his coat closed.

Dana looked momentarily taken aback, and then he nodded. Gears thought briefly about apologizing. He was frustrated at life right now, not at the new doctor. This was it. There was nothing more they could do. He couldn’t accept that. He refused. There had to be an answer somewhere. Picking up his black backpack from the floor, he swung the bag onto his back. He would figure out this puzzle by himself. He could do it. In the past, he’d always solved problems like this on his own.

“Before you go, I want to say something. I plan to stay for the birth of Karma’s baby. That was the agreement I made with Keith. I think with the two of us and the midwife, it should go smoothly.” Dana glanced down at the papers in his hands, then held them out for Gears to take. “But I think that before I leave the base, you should tell Karma and Mac.” He paused again. “Specifically, Mac.”

Gears snatched the papers out of the other man’s hand. He stuffed them into his bag. He wasn’t going to tell his friend. He wasn’t going to tell anyone. Even though lying went against his private code of honor, Gears had chosen to keep this a secret from both Karma and Mac. He’d told them that he was just going to Headquarters to work on information the C.T.O.N.A. had released about Snow Flu. It wasn’t an outright lie, but that didn’t give him peace. True, he was going to do as much as he could for the growing population who were sick, but he was really going to get access to better medical care. Telling all this to Mac would only bring around pity and coddling. Gears wasn’t going to leave as a dying man, and he wasn’t going to heap his problems on his best friend, particularly not when he had a new baby due any day. He was alright on his own. He was, after all, a brilliant scientist.

Returning to the door, Gears rested his hand on the knob.

“Keith asked you to come here because he was concerned about Karma giving birth with only a male doctor, and he misunderstood your name. If you hadn’t shown up, no one would know about me. I plan to keep this between us. I expect you to honor doctor-patient confidentiality.” Gears didn’t turn around but stubbornly stared forward. He was acting as wooden as the door, but he didn’t care.

“Is that the polite way of telling me to butt out?”

Gears glanced over his shoulder. “I didn’t think I was being polite.”

“I respect your wishes even if I disagree with them. I want you to know that I plan to travel with you to Dallas when you’re ready to relocate. We may not get along very well, but you’re my patient whether you like it or not.”

Gears’ shoulders slumped. This conversation was exhausting. He didn’t want to have a doctor taking care of him. He hated lying to his best friend. And most of all, he didn’t want to be dying because his heart was pumping incorrectly.

Taking one last look over his shoulder, he nodded to Dana. “Good afternoon, Doctor.”

The words were barely out of Doctor Dana’s mouth when there was a loud rap that grabbed their attention.

“Doctor? Oye?” The words were followed by more banging. Gears threw open the door. Essie was standing on the other side. The tall Hispanic water base guard had his black curly hair sticking up everywhere. Sweat dotted the young man’s brow. He looked like he’d run through the base.

“Gears!” Essie exclaimed. “Karma’s having her baby. Boss sent me to get you.”

“She’s two days early,” Dana commented as he picked up a large green medical case off his desk. “She’s in her room with Mac.” Essie was breathing hard. Another indication that he might’ve run through the base. Either that or a signifier that he should quit smoking. “I’ve been looking for you.”

“We’re coming right now.” Gears pushed everything Doctor Dana had just told him about his heart out of his mind. Mac’s baby was more important. The child would be his only focus right now. Whenever anything was too scary to deal with, he took solace in his work. He was absolutely going to do that now.

“You go ahead of us, Essie.” Dana waited for Gears in the water base hall. “Tell Mac to check her contractions like Doctor Gears taught him. Make her comfortable.”

“Did you tell the midwife?” Gears asked as Dana closed the door behind them. They started down the hall. “Keith wanted a woman there.”

“I’ll do that next.” Essie was off like a shot. Gears glanced at the other doctor when he put his hand out to stop Gears from chasing after the twenty-year-old.

“You’re not running anywhere,” Dana frowned. “You will walk. Slowly.”

So much for being able to ignore his failing heart.