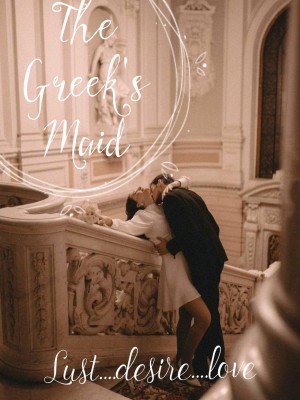 Sarah Lancaster's life had enough problems on its own, and trying to resist her sexy and insatiable playboy of a boss was one of them. She already knew about the reputation of her boss before being a maid of his house. Kris Giorgio, son of the CEO of Giorgio Industries, the billionaire bad boy, a total player but who would eventually marry some other rich woman. Sleeping with him was the last thing she wanted. He is the last man she should ever think of falling in love with. She tried everything to get away from him but, ‘I don't care if you're just a maid, I want you, and I know you want me too'. Her impudent boss said. All she could do was stare in disbelief.......what kind of man was he?!! And why would her heart beat faster because of his words?! Sarah, are you crazy? !!

It was a perfect and beautiful morning in New York but for Sarah,it was a dreaded sunny day as her hands were full with envelopes containing bills she had to pay.Her rent was due and she was just fired from the one job that kept her away from the streets.

‘Hey Bobo'.She absentmindedly waved at the block's dog walker,Bobo who had frizzy brown hair and wearing his signature pink coat, sometimes she even wondered if he wore anything underneath the horrendous garment.

She walked the stairs towards her apartment on the third floor,and ran back down immediately to hide when she heard her landlord banging on her door.She just lost her job,she owed him rent,and she wasn't in the mood to get thrown in the streets.

‘Come out Lancaster,I know you're hiding in there!!'

.Mr Douglas yelled at the top of his cranky voice and Sarah muffled a squeal that almost escaped her lips.

Mr Douglas, lanky and with sharp eyes quickly spotted her as he came down the stairs,she was behind the cleaning lady's trolley and her platinum blonde hair was hard to miss.

A soft scoff escaped his lips as he stayed quiet whilst Sarah,who thought he was gone,came out of her hiding place only to find him with a huge scowl on his face.

She impulsively made to run, but tripped on the mop bucket behind her and dirty floor water was all over her. She scampered across the space for her wet papers which were important and Mr Douglas,as treacherous as he could be, stepped over some of them and soiling them with mud on the sole of his boots.

‘You are one heck'u'fa thief aren't ya Lancaster?'.

Mr Douglas chuckled haughtily as he nitpicked the piece of meat stuck in his teeth,Sarah shuddered and tried to leave but he grasped onto her arm which made her cry out.

An abusive landlord was enough red flag to make someone leave, but Sarah had more than enough debt in her measly name to clear.Mr Douglas made sexual advances towards her in the past and her due to her refusal;hence his cruelty towards her.

‘I'm going to the bank Mr D, I'll make sure I pay you before the week runs out'. She said and his brows puckered in question.He contemplated her explanation of a moment,and then gripped harder onto her arm as he gave her a clear warning.

‘I don't play games Lancaster,ya know that don't'cha?.......I give two days Lancaster,two days and you're leaving my building!!'. He yelled and walked away.

Sarah sighed deeply as she wiped away the spots of spittle on her face and walked the stairs to her apartment.

It was a dumb apartment.The size of a matchbox

.The roof was leaky,the pipes in the bathroom was a mess,the kitchen had rats, and the water wasn't even runny enough,it was even colored and stinky when it did.

Complaints have been made times without number to the landlord but he didn't care,the tenants never left anyway.No one in their right mind would want to rent a room in Mr Douglas's apartment,the ones who did were proof enough of a hard life in New York.

Sarah came to New York in high hopes,escaped from her life and parents in Seattle but it wasn't all dreams and roses.

The first few months were good but then the bills started rolling in,her parents were gambling in her name and she had to pay them up,her income was no longer enough for sustainence to the point of selling her dog just to pay a little debt.

A groan escaped Sarah's lips as the electricity got cut off,courtesy of the landlord.

She reluctantly walked over to her fridge and brought out the pork loin which was showing signs of spoiling,sliced it in pieces and kept it ready for some instant noodles.

Her phone alarm buzzed very loud when the time hit six and she shoved the meat back into the fridge,silently praying it doesn't rot when she returned,.

It’s time to go to the bank.

‘You haven't been picking my calls Kris'.

The almost anorexic model blurted out loudly. Just as she came out of her car, she spotted her said-to-be boyfriend outside..

‘Camilla,agape mou,can we not do this right now??'. Kris rolled his eyes as he tried to get back into his car but she grasped onto the waistband of his pants.

He has had a long night and all he wanted was sleep,but no—the women in his life wouldn't just let him be.

‘Is it true you went out with my Carmen Diaz last night Kris?!'.

Camilla,the already name- established model questioned and didn't care if she was raising her voice.

Kris didn't care either,after all he already had the reputation of being the billionaire bad boy while she had hers to protect.

‘It was just a date Camilla,if you want to break things off then it's fine'.

His voice was so lackadaisical to the point that it made his driver and bodyguard amused. Camilla threw a dirty look at the men and they focused their gaze elsewhere to avoid any trouble even though they were paid to make sure Kris was safe.

‘I'm not breaking things off with you Kris bu—

‘I'm sorry but I can't spend my life with a woman who doesn't respect me'. Kris yawned and went into the car,it drove off just as Camilla began to hurl dirty insults at him but he didn't care anyway—

he was Kris Giorgio—

and she wasn't the first woman to throw an accessory at this car.